TREATMENT is a two day art experience on a bus to witness the work of six artists who have responded to the Melbourne Water Western Treatment Plant. Curated by Professor David Cross and Dr Cameron Bishop the following artists participated. 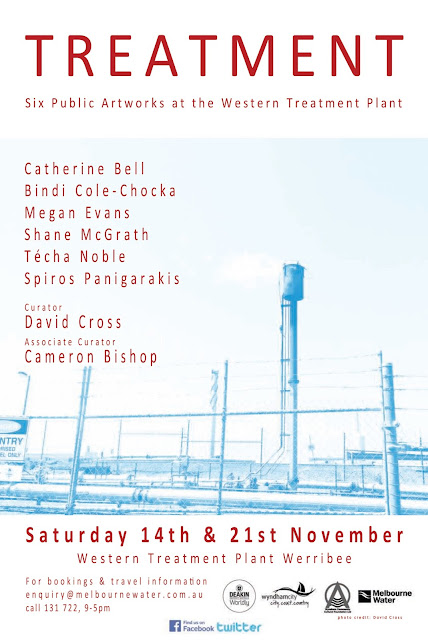 Over a five month period we all researched the site and come up with our response. My work is in the Water Tower which was the first reservoir in Melbourne built in 1854 and sited on Eastern Hill, approximately the current site of the Australian Catholic University. It was moved to Cocoroc the township at the Werribee sewage farm, as it was then called in 1893.
I took this as infrastructure of colonisation and approached my object and sound installation from this perspective, keeping the project inside the larger body of work I am doing titled KELOID which looks at how to take personal responsibility for the actions of my ancestors who were early colonisers. 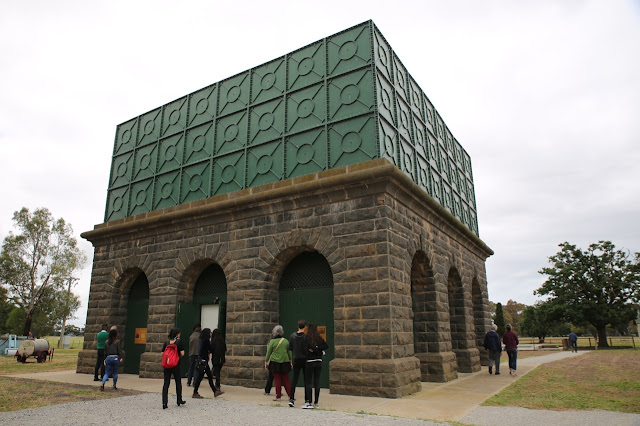 I replicated the signage on the tower with my personal perspective. It contains an image of my Great great Grandfathers immigration papers as well as a quote from a 'squatter' Neil Black from 1839, among other things. 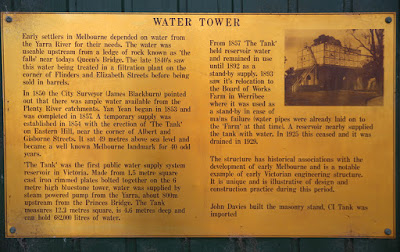 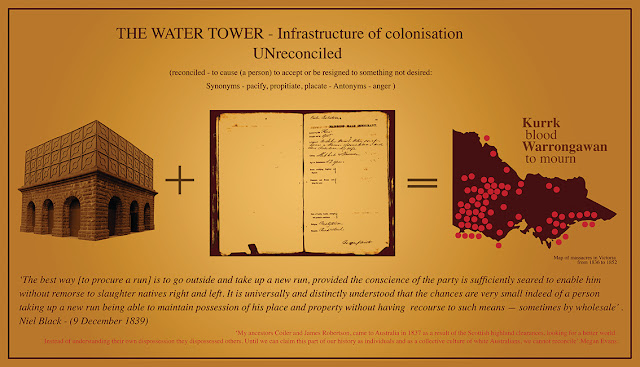 The space under the tower was blacked out and a sound installation of dripping water, running water and an occasional gun shot could be heard along with a haunting rendition of Waltzing Matilda played on a small music machine which was attached to one of the objects in the installation.
It was described by people as haunting and macabre. 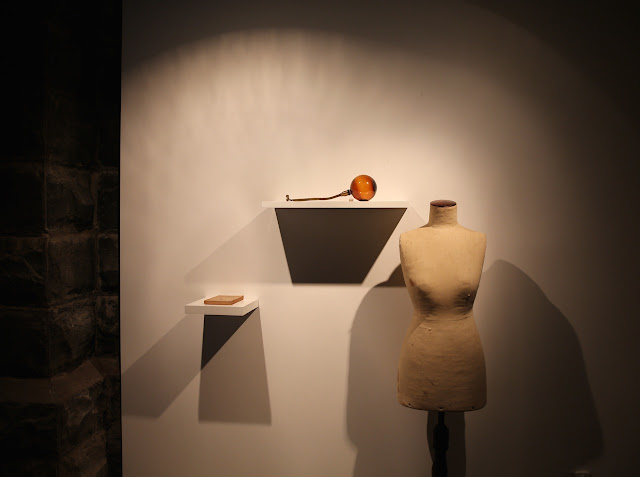 Not Guilty - the defence of the bottom dog 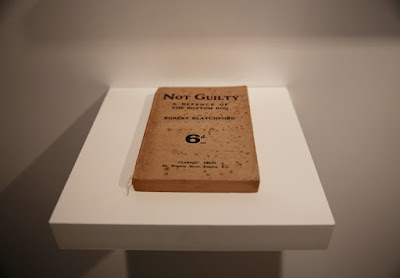 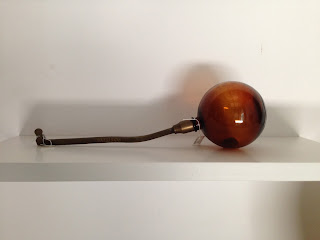 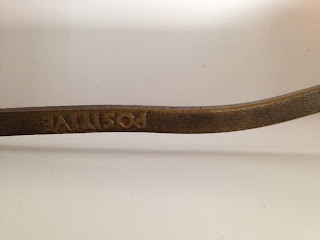 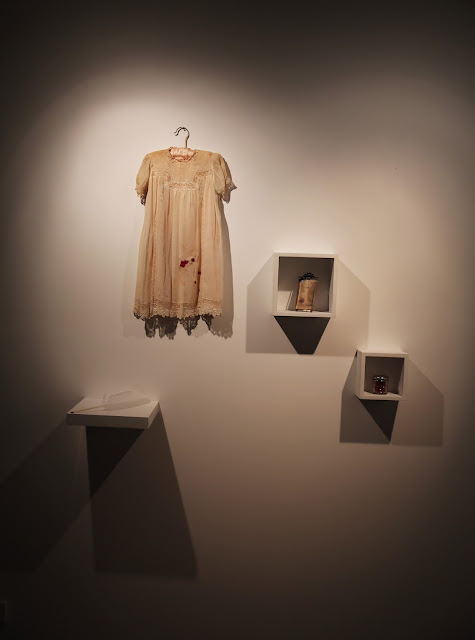 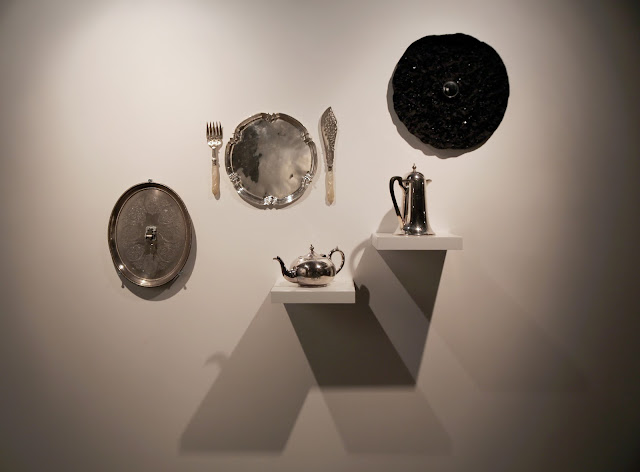 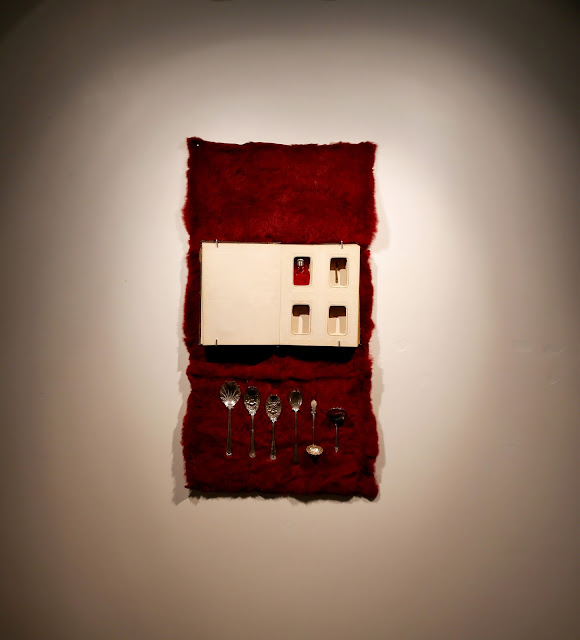 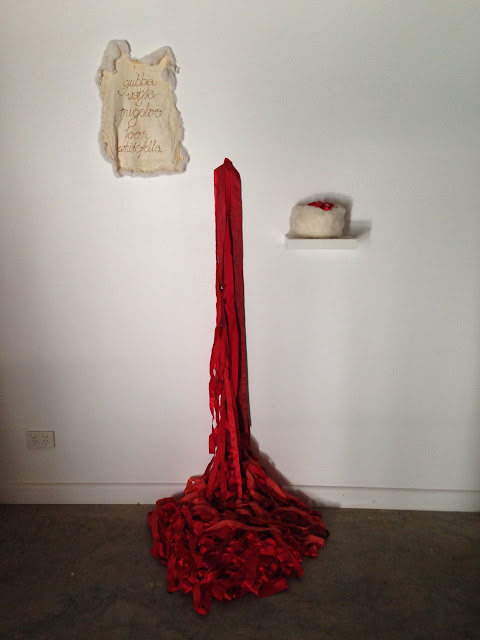 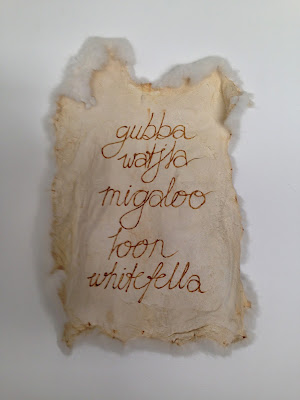 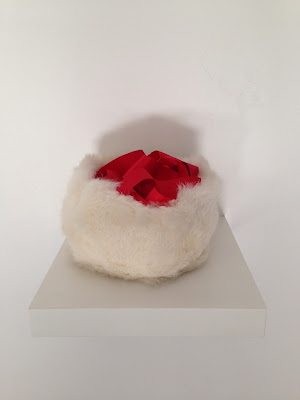 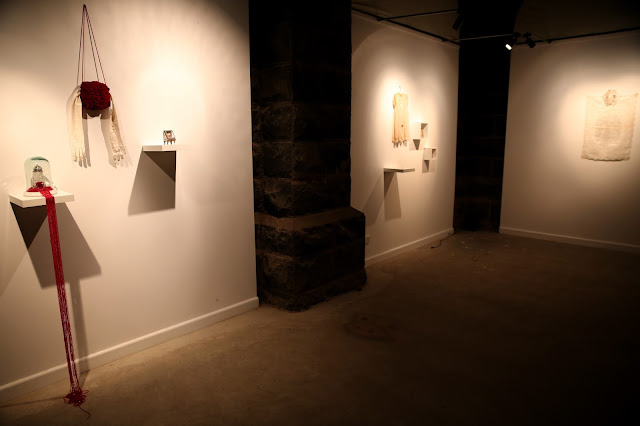 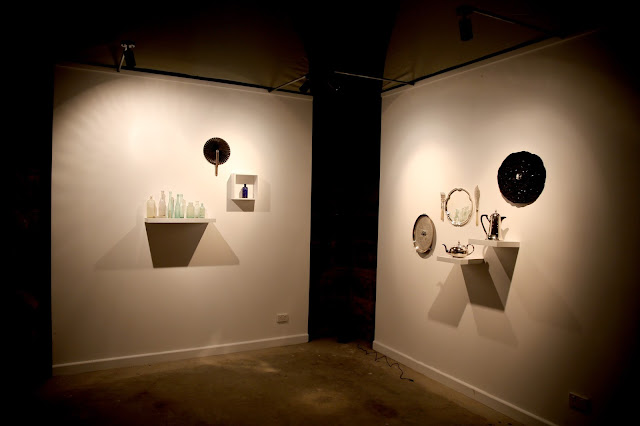 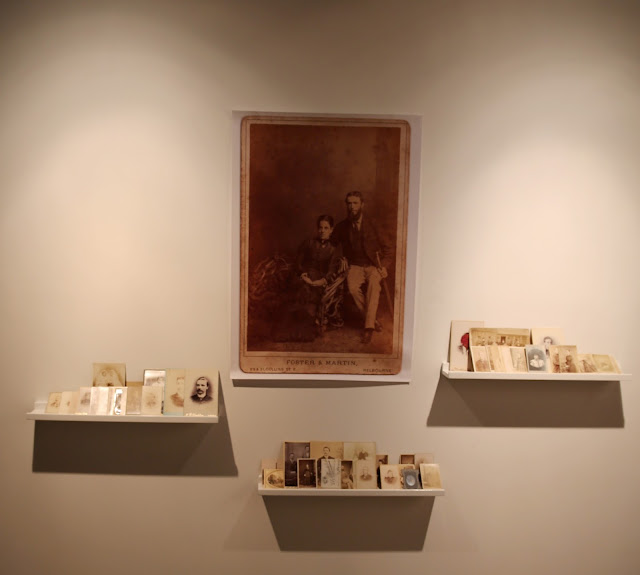 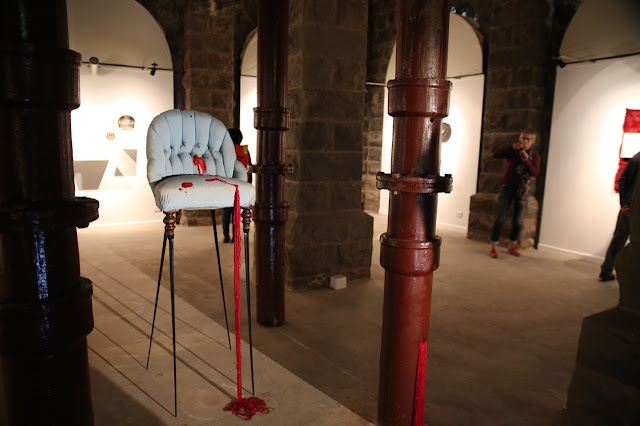 Catherine Bell's work was next to the Water Tower and was an intervention into the dilapidated swimming pool for the ghost town that once inhabited 600 people. She included a video and sound installation using original video of children swimming in the pool projected into the change rooms that were littered with detritus and leaves. Also haunting. 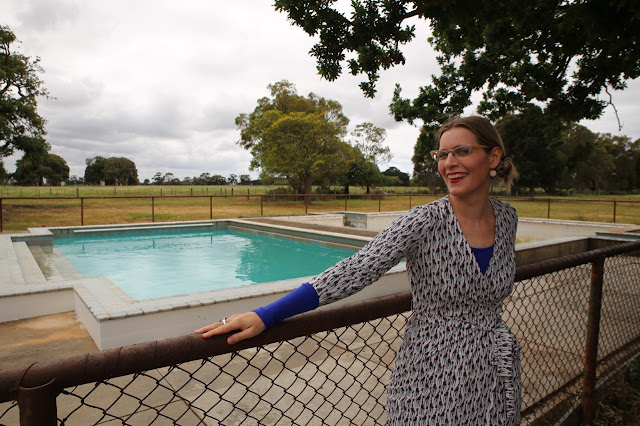 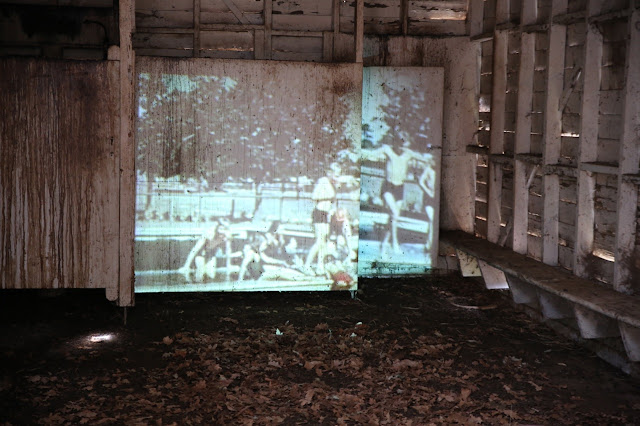 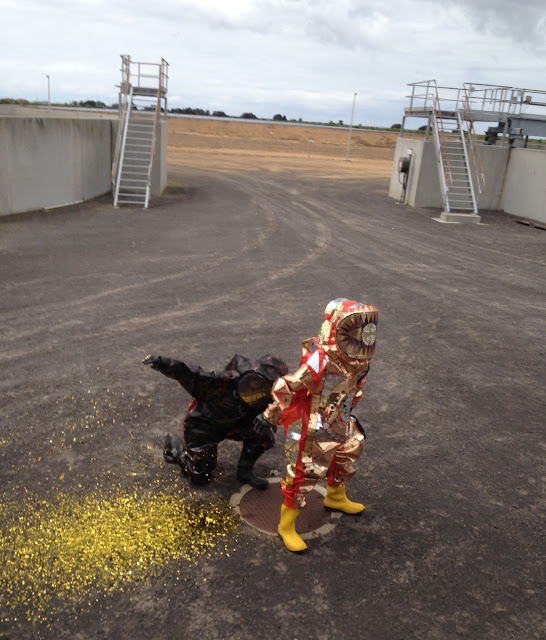 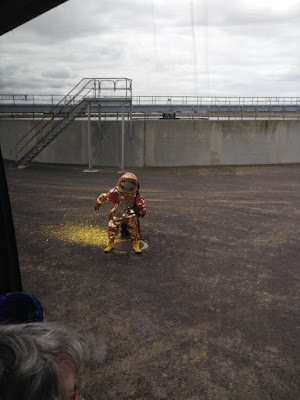 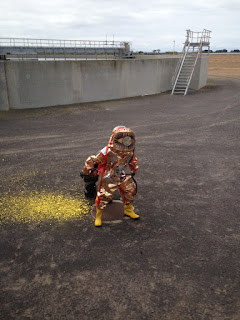 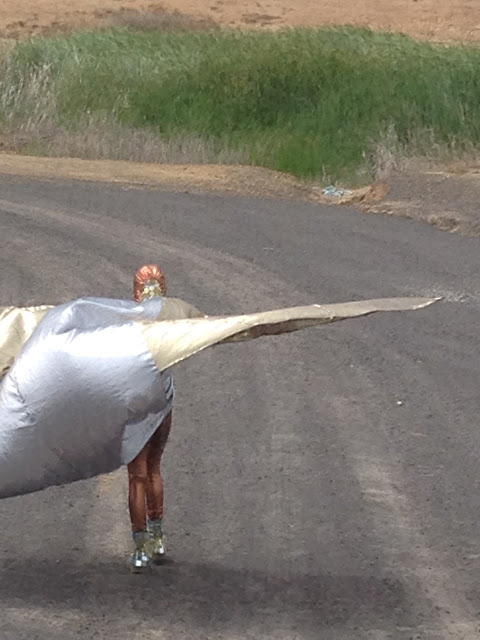 Shane McGrath researched the history of the Cocoroc football team and reconstructed the team for the day with replica jerseys and the team song played on the bus. Visitors stopped to see the players leave the field and then be locked out of the old club rooms while the coach gave his speech loudly enough for everyone to over hear. 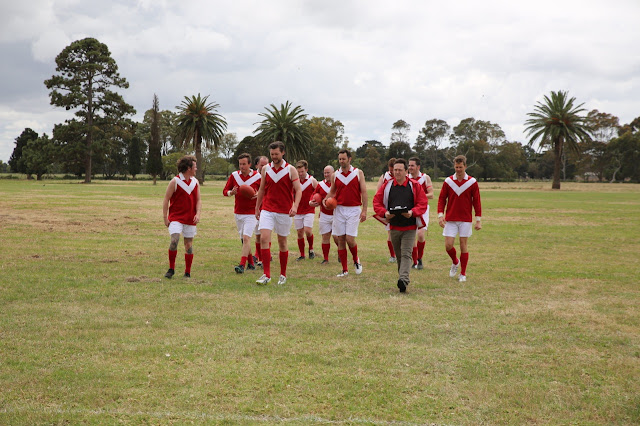 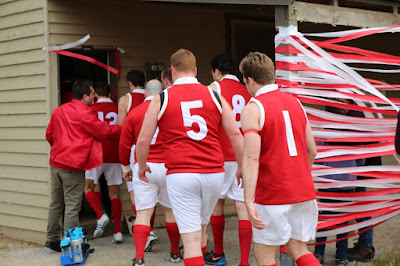 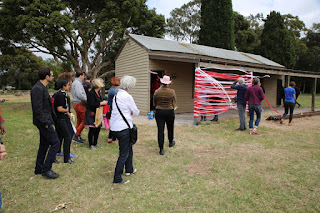 Posted by Megan Evans at Saturday, November 14, 2015 No comments: