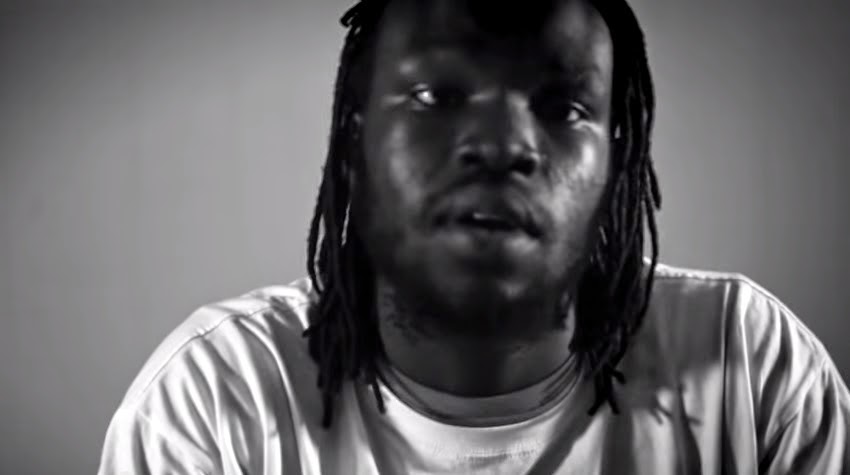 Its shameful really that he has been so fully able to express, in one short period of his life in Australia, what I have felt, thought, believed and worked towards for so long. Is it my whiteness that makes me relatively silent. I wonder how I would be seen if I were to say exactly what he has said but as a white person. What stops me? Somehow I feel he has the right to take the moral high ground enough to do this but I don't. Maybe this is diminishing his sincere and wonderful apology. I think that all of these thoughts are just an indication of the complexity of whiteness and the way I shrink from my own privilege while at the same time inhabit it so blindly. This brings to mind the prose piece I wrote when National Sorry Day first came into being. My first reaction to it was anger. I was outraged by what I felt were the well meaning but empty apologies that people were speaking into the ether, not directed to any Aboriginal person because most of the people saying sorry didn't even know an Aboriginal person.
It was read out on ABC radio and then eventually in parliament by Senator Nick Bolkus at the closing of the Wik debate which was the longest debate in Australian parliamentary history.


In Response to National Sorry Day
I haven’t signed the sorry book. It seemed to me to be too small a thing to do to express a very big feeling.
My husband was one of the stolen children.
He was a year younger than me.
I’m sorry.
I’m sorry that when I was a child of seven wearing party dresses and carrying my suitcase to school, he was regularly being beaten with a strop strap at a children’s home and running away by hanging underneath a train all the way from Sale in Gippsland to Richmond station.
I’m sorry that his mother died in 1988, the year of the bicentennial, at the age of 46 and I am lucky enough to still have the company of my mother at the age of 75.
I’m sorry that I am about to embark on my 8th year of tertiary education and he had to study for his HSC from books he begged for in jail.
I’m sorry that he was nine years old when his mother was eligible to vote, having some small say in a future on his behalf, yet my parents took that right for granted for all of their life and mine.
Most of all I am sorry that I couldn’t ever know his pain or do anything that would take it away.
He used to say that he wished someone from the government would apologise for the mess they had made of his life.
I am sorry he died a lonely and painful death with a noose around his neck in 1993, the International Year of the Worlds Indigenous Peoples

Please watch Abe's video. It is what we all need to do.
I now fully appreciate Sorry Day as an important and powerful event for both black and white Australians.
Posted by Megan Evans at Friday, June 27, 2014 No comments:

I'm really disappointed that I didn't get a State Library fellowship. It seemed so perfect as the next thing to do. I will just have to keep researching on my own.
Rejections are a part of the game for artists and every artist knows that but sometimes you REALLY REALLY want something and when it doesn't come through it is harder to take than other things.
I have so much material to research I was hoping that the time spent in the Library would focus me. It is hard to make myself sit and do the research I know I have to do when the studio and the joy of making is like a siren calling me away from the computer.

I have started work in my home studio this week. 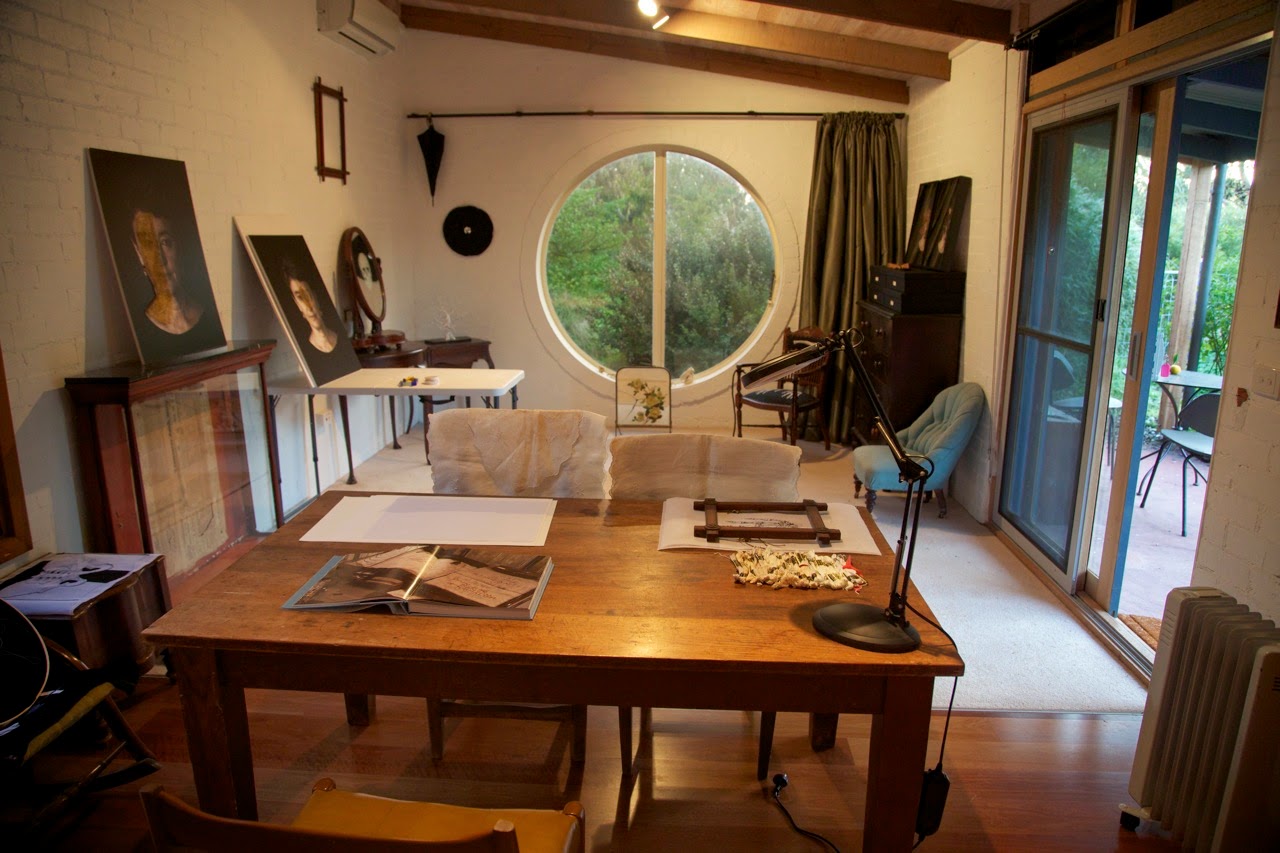 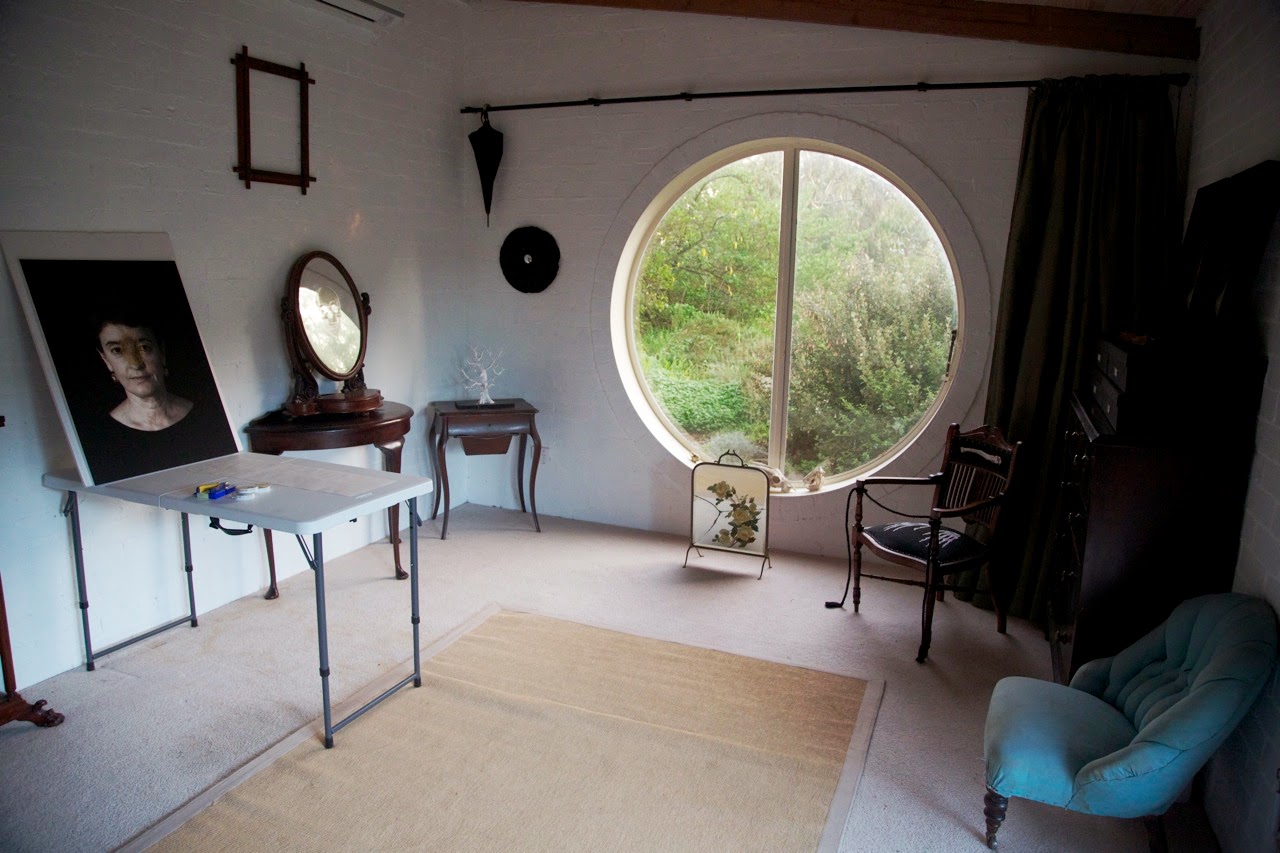 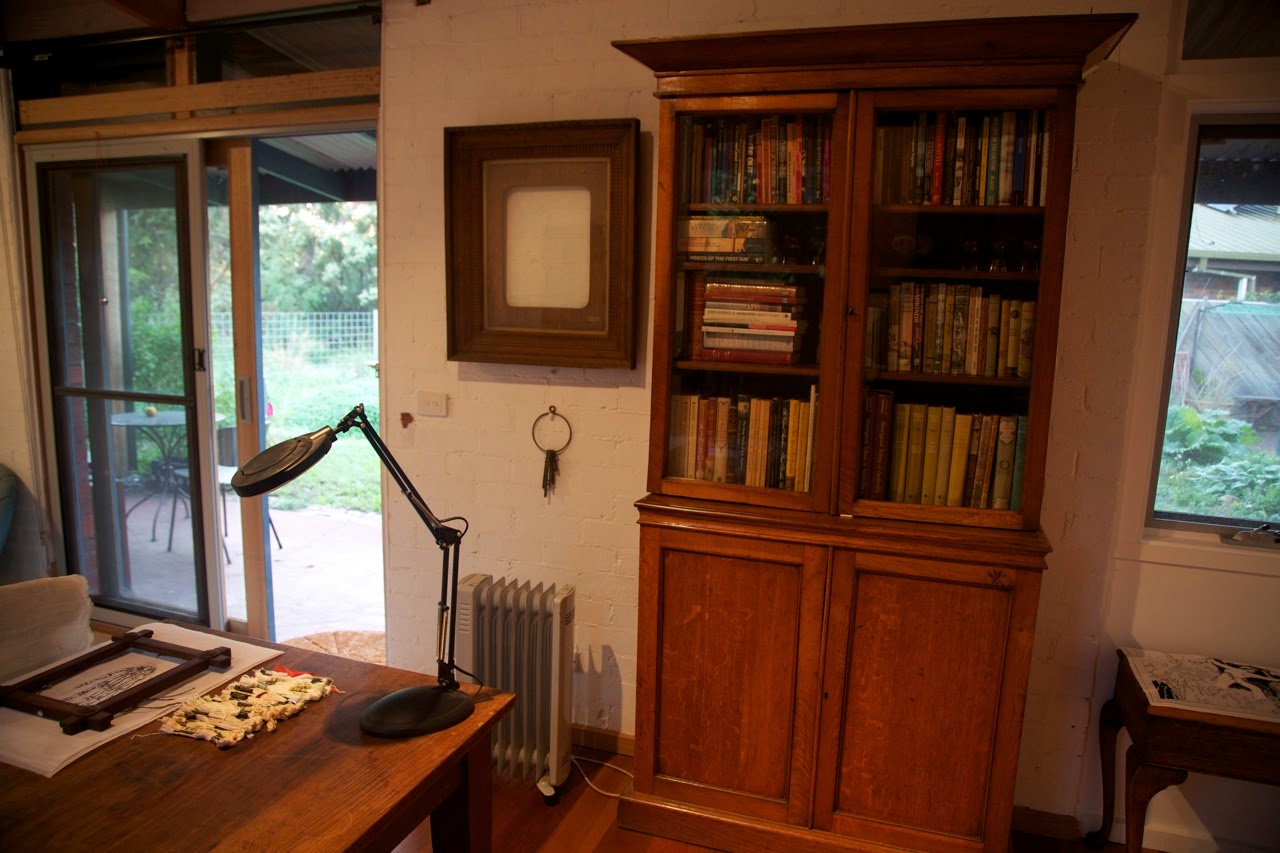 It feels so special working here. It used to be my Mums flat while I was able to look after her at home. It took me 3 years before I felt able to have it as my studio.
I am doing work here that I need a dust free environment for, and the River studio is space where I can experiment and make a mess.
I noticed this week that I have moved away from the images of my great grandparents and am working only on images of myself. At the moment I am doing three pieces that involve sticking thousands of pins in my face. Understandably I guess, I am feeling a little blue. A strange anxiety has settled in me that I am sure is a part of this work.
I have a big book on Louise Bourgeois on my table and find myself looking at her work every day.

I have moved studios. The neglect of my blog is due to the tired muscles and sore joints from having lifted things that are too heavy for me.
I now have two studios which feels a little extravagant however it means that I have a space at home and a smaller space at River Studios. 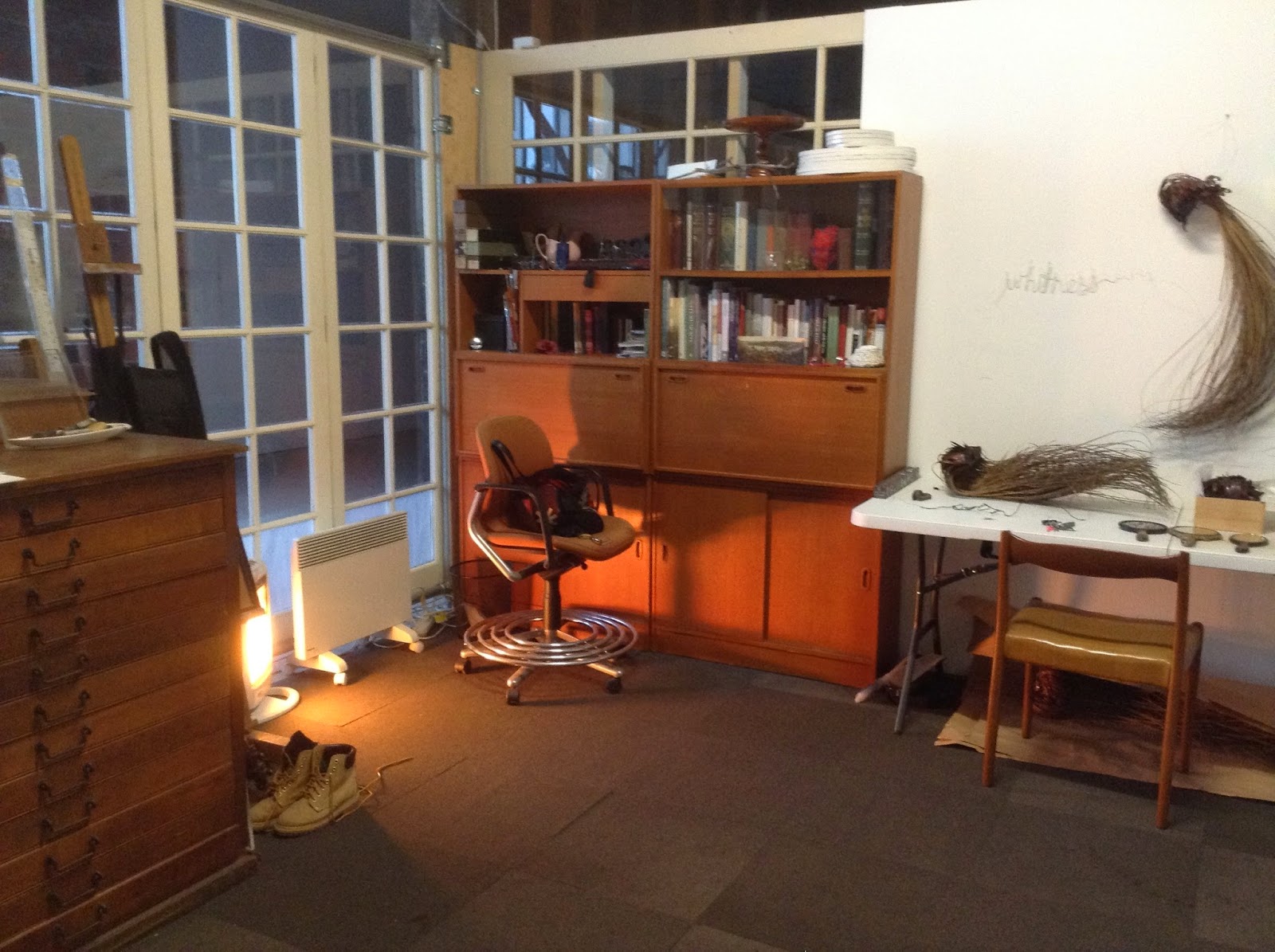 This new space is a large square white walled space which calls for new things, new ideas. It is actually next door to my previous space and even though I was reluctant to leave my big space I like the feeling of having emptied everything out and creating a space for experimentation. I have taken most of the furniture to the studio at home where I will work on it in a less dusty environment.
In the process of moving I screwed up an old print and out of that seemed to have made some new work. Not sure yet how it will progress but I like the distorted images. 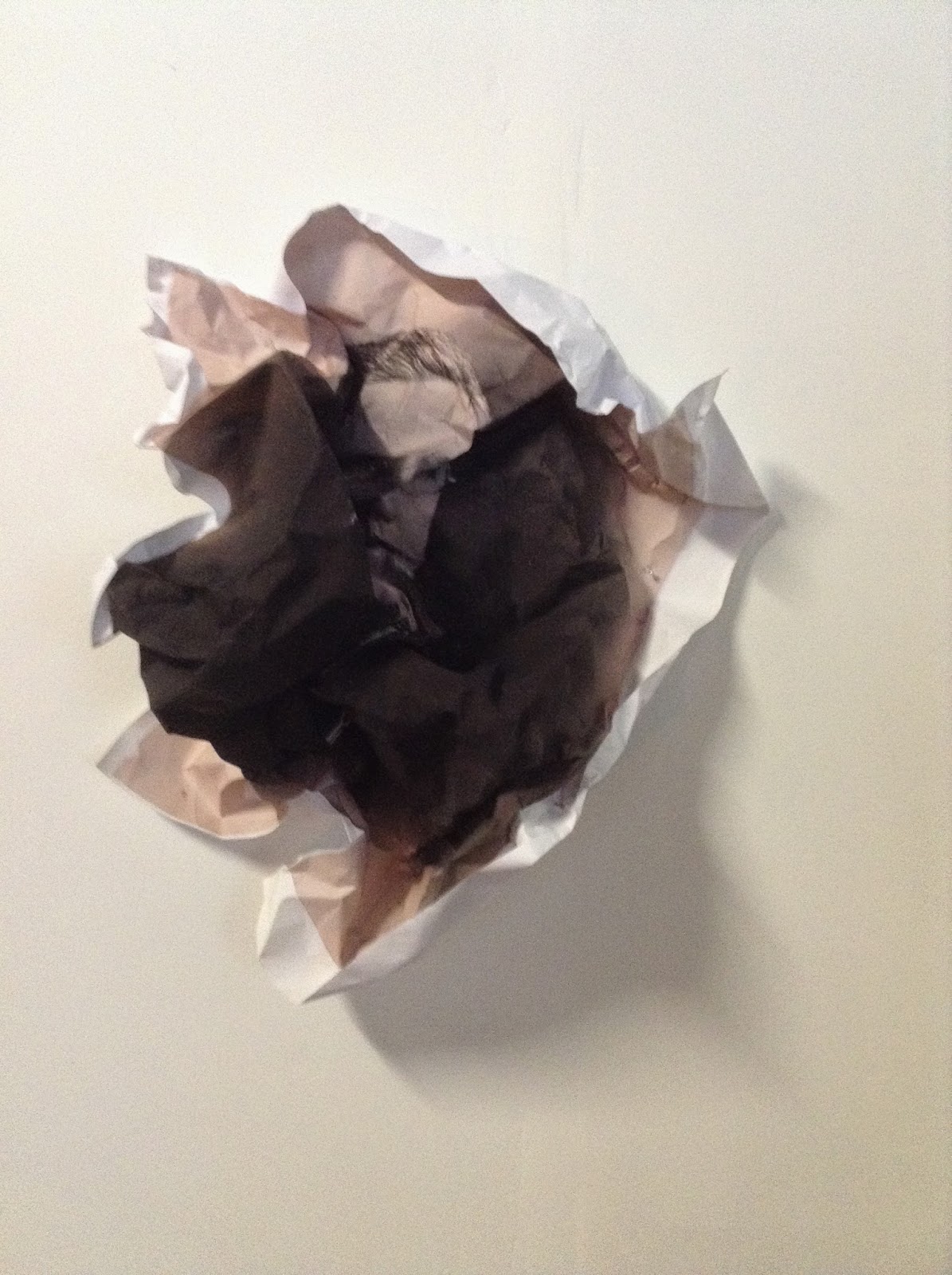 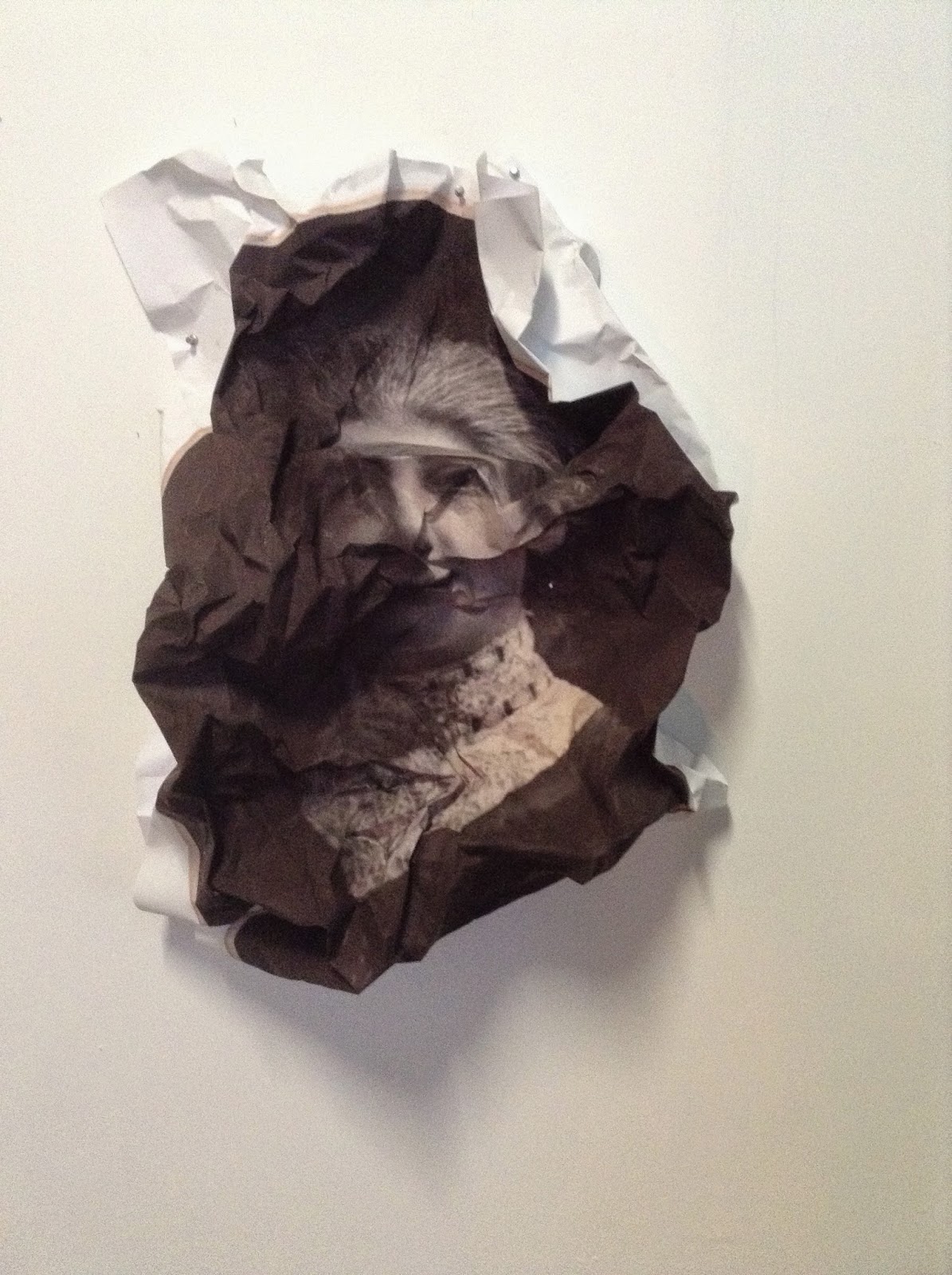