How to be thankful enough?
I cannot express how moved I was by my dear friend and colleague's generosity in offering the opportunity to participate in a ceremony of mourning and healing.
Maree Clarke is an artist who is reconstructing her heritage and culture in a profound way.
I always remember saying to Les that the burden of the notion of 'traditional art' was a white persons thing. In the past his people made objects, created performance, participated in ceremony as a part of life. It wasn't 'culture' it was a way of living and a structure that had supported his people for hundreds of thousands of years. Culture is an invented concept to describe something after the fact.

If he was Aboriginal then whatever he did was Aboriginal art and he would respond to his environment and circumstances in the same way that his people had done for thousands of years and that would be 'authentic'. I like to think that this was the soundest piece of advice I ever gave him and resulted in him doing paintings about being institutionalised and incarcerated.

Many years later Maree Clarke is not only making artwork about her experience, which has involved more loss and grief than any white Australian experiences in a life time, but she is recreating her ancestors practices as a way to heal herself and others. 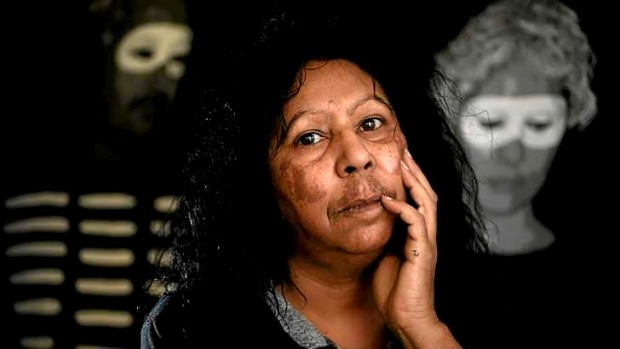 Maree Clarke with her work Ritual and Ceremony

I have the amazing privilege of working with Maree who I have known for over 30 years and she commented a month ago that I looked heavy with grief after a year of loss involving my mother and best friend as well as other significant people which added to a long history of loss beginning with my brother who died 31 years ago.
Maree Offered to do a Copie healing with me, which is a traditional mourning practice in the country where she comes from along the murray.
Maree is a Mutti Mutti, Yorta Yorta, BoonWurrung woman from Mildura in northwest Victoria.

We began on a cloudy and cool day in her backyard in Footscray. A young PHD student from Sydney who had experienced a recent significant loss also participated. Amalie is embarking on a research project looking at art and healing and was invited by Maree to experience it first hand. 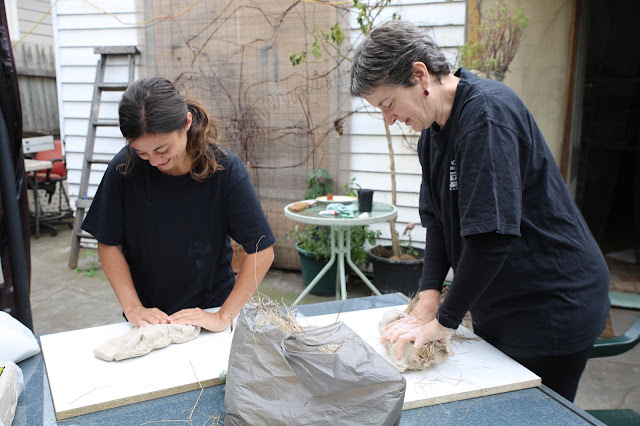 We began with kneading the clay. I worked in Kangaroo grass from the river whenre I live on Wadawurrung country and then added some of my mothers ashes. 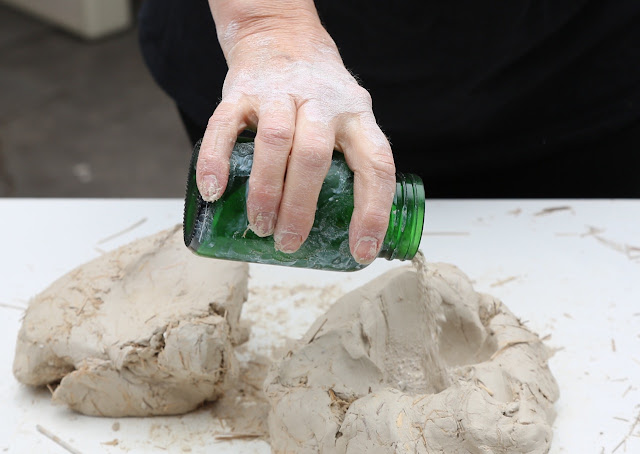 I then flattened the clay onto more grass and pressed ashes into the surface. 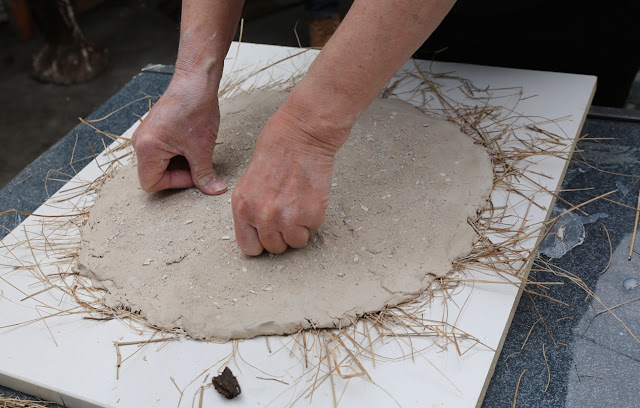 Maree then folded the clay over my head while I was able to allow myself to be present to my love and loss for all those who had gone. 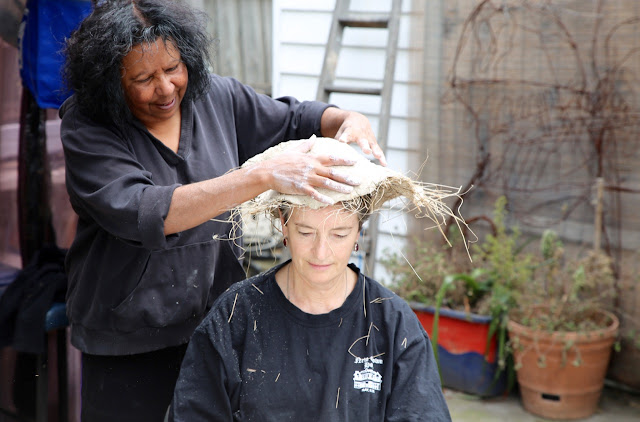 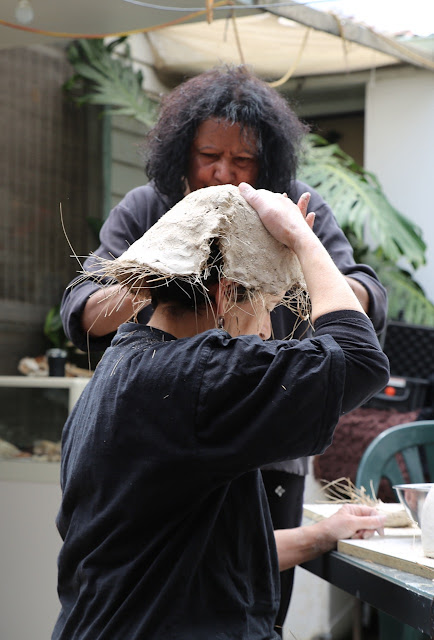 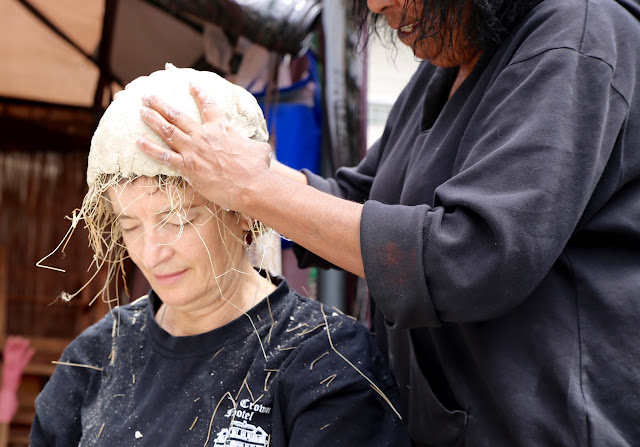 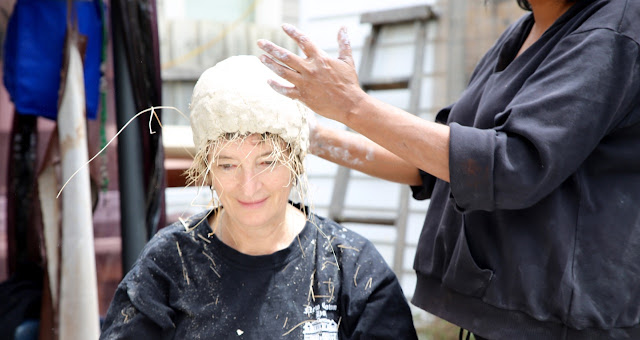 The experience of being enclosed in this earthen aural tomb was extraordinary. 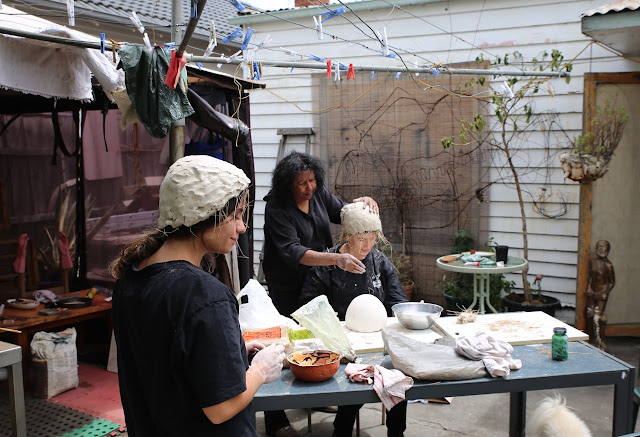 Both Amalie and I commented that it was  such a protective space in which to allow all those feelings to arise. It was slightly akin to being underwater or perhaps in the womb where your sense of enclosure resonates in your head and outside sounds are muffled. The clouds cleared away and we were flooded in sunlight. 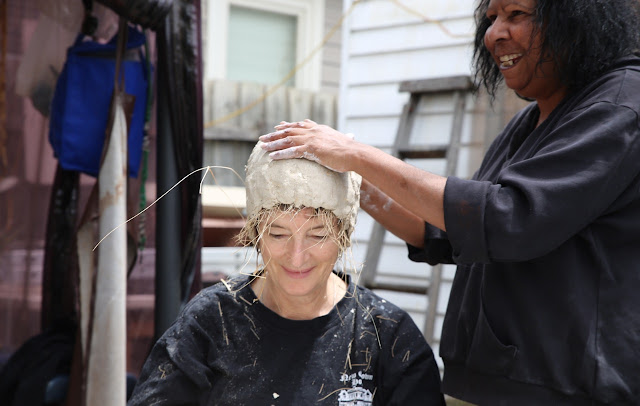 A flush of peace flooded through my whole body, like a long sigh. 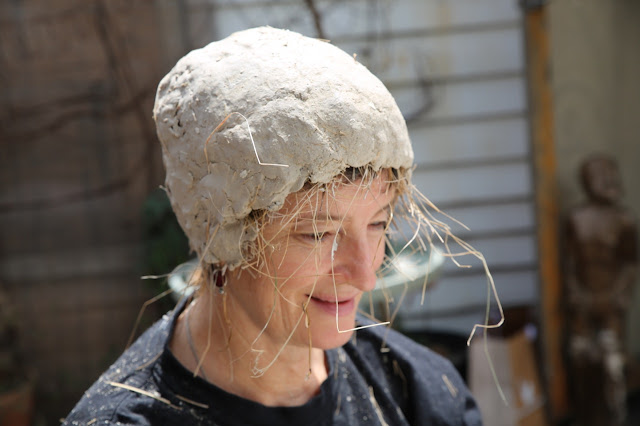 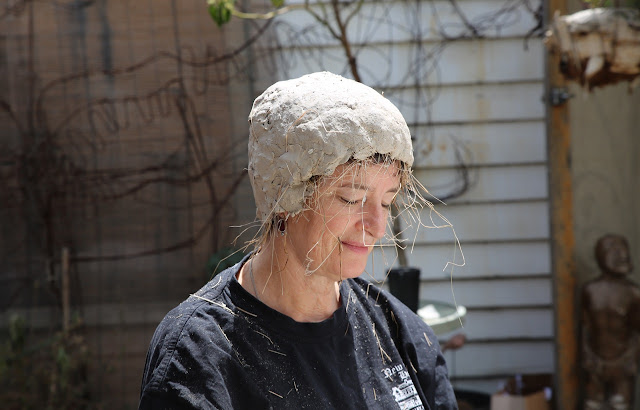 This mourning practice was done along the upper murray until the brutality and inconceivable ignorance of colonisation interrupted it in the early 1800's. The Rufus River Massacre is one such recorded example where Aboriginal people, who were trying to protect their land and its fragile ecology from settlers sheep and cattle by waving spears at the intruders, were shot and killed in large numbers.
My grief is not just for those close to me but also for the shameful past that my ancestors were a party to by being present in this land at that time. 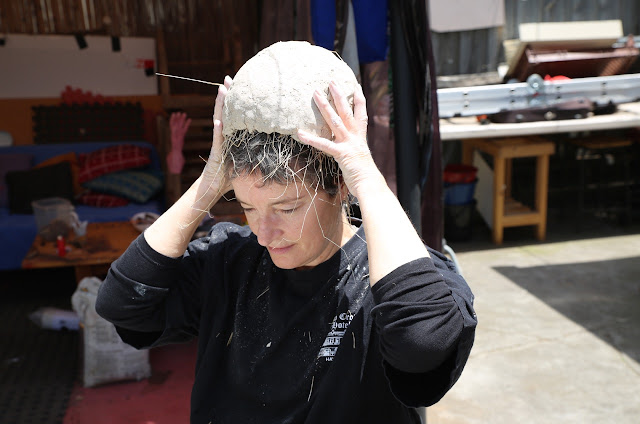 After sitting with the Cope on for close to an hour, Amalie and I took them off. In the past Aboriginal mourners the Copie would have been worn for weeks or months depending on the relationship to the deceased. In some cases they allowed the clay to disintegrate on their heads. They would sometimes weigh up to 7 kilos, making physical the weight of grief. 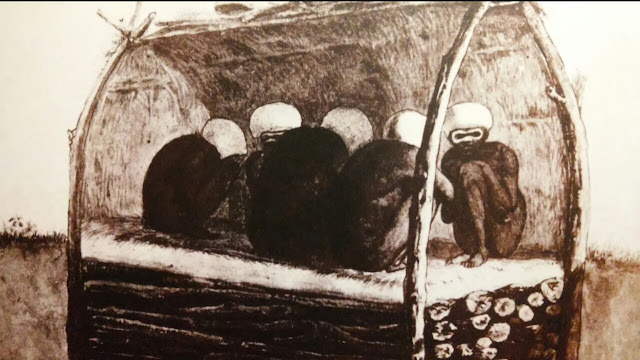 Women mourning for their husband from the Blandoswski collection

The experience of lifting the Copie from my head even after a relatively short time was amazing.
It was like lifting the weight of loss and sadness from my shoulders. I sometimes wonder wether some of the cliche's we all use in contemporary times have come from these age old practices. 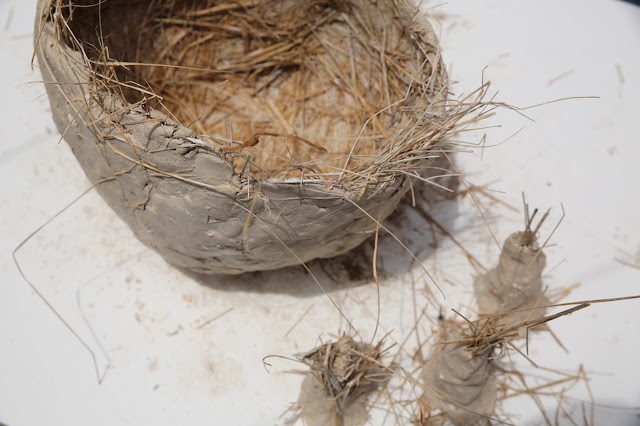 The generosity of my friend in sharing this with me is also inconceivable in some respects, given the history of our country and the fact that I come from the settler colonial culture that is responsible for the near destruction of hers. It is indicative of the extraordinary resilience of Aboriginal people that has enabled them to persist, even today in a majority white and predominantly racist culture that is Australia.
I was moved when I learned that while I was being given such a generous healing by a sovereign owner of the land, there was a racist recognition of the Cronulla race riots ten years ago.

Out country is so complex and I dream of the day when it can truely be called 'our country', with integrity, by all who live in it. This can only happen as people are starting to recognise by recognition, restitution and THEN ...conciliation.

THANKYOU Maree
I love and respect you deeply!